This initial blog looks at the first and the last Regimental casualties overseas, so both England and Continental Europe. I’ll actually be looking at three people; Sgt. Ernest Grundy, who was the first to die, but not in combat; Pte. Herbert Millote, the last soldier killed in action (KIA); and, Pte. Arthur Summers, who was the last Black Watch soldier to die in Europe. I should note two things, however. Firstly, Sgt. Grundy was, in fact, the second Black Watch casualty, but the first was a suicide and I decided not to include details of that incident. Secondly, the first KIA’s for the Regiment were actually in September of 1942, during the ill-fated raid on Dieppe, where two officers and two OR’s were killed. I’ll try to cover those in a separate blog.

As mentioned above, Sgt. Ernest Grundy was the second Black Watch overseas casualty, dying of an apparent heart attack on November 19, 1940, while the Regiment was stationed in Aldershot, Hants, England. He was 35. Sgt. Grundy was one of the ‘originals’, having joined the Regiment on September 9, 1939 – eight days after the declaration of war on Germany. Sgt. Grundy was born on December 4, 1894 in Bolton, Lancashire and was living in Montreal at the time of his attestation. He had married Emily Wood, almost ten years his senior, in Bolton on June 22, 1917 and they emigrated to Canada in 1923. Ernest and Emily had two kids, Ernest, who was 18 when his father died, and Mavis, who was 16. The eldest Ernest was a fairly experienced soldier, having served for four years with the 3rd. East Lancashire Brigade, which was a reserve force that served near Plymouth during the First World War. He also joined the 42nd Battalion the Black Watch (RHR) of Canada in 1935 and seems to have been with that militia unit at the outbreak of the war in 1939. This previous experience seems to have paid off as he was promoted to sergeant on June 1, 1940. Sgt. Grundy is described as being just over 5’ 7” tall, 171lbs, with a sandy hair, blue eyes, and a ruddy complexion. Sgt. Grundy travelled with the Regiment as they sailed to Botwood, Newfoundland, in June 1940, then back to Halifax on August 13, where they were briefly billeted in Aldershot, Nova Scotia, before finally departing for England on August 23. The Regiment arrived in Gourock, Scotland, on September 9. Sgt. Grundy was in England for a very short time before his death, the impact of which is described in the War Diary:

The Battalion was unfortunate in having another casualty this month. D.81257 Sgt. Grundy, E. who died of natural causes while having lunch in the Sergeants’ Mess. A veteran of the War of 1914-1918, his loss was felt keenly by ‘E’ Company where he had been a guide and advisor to many a newly enlisted young soldier.

The last Black Watch soldier to be killed in action was Pte. Herbert Milotte, born on May 12, 1921, in Lanark Ontario. Herbert Milotte was a mill worker and seems to have been living with his parents at the time of his attestation in Ottawa, on the 13th of August, 1942. According to his army physical he was 5’ 4 1/2”, 127lbs with black hair and hazel eyes. Pte. Milotte was taken on service at the Canadian Army (Basic) Training Centre in Cornwall on August 28, 1944 and remained there until he was transferred to the 71st General Transport Royal Canadian Army Service Corps back in Ottawa. On August 29th his unit was in Camp Debert, Nova Scotia. Camp Debert was a division level training camp and the last staging area for units embarking to the U.K. All five Canadian divisions of the First Canadian Army were housed and trained in Debert prior to leaving for the European theatre. Pte. Milotte was promoted to Lance Corporal on December 13, 1942 but was reverted back to private when he arrived in Scotland on September 1, 1943. His service record gets somewhat complicated as he seems to be attached to the Royal Canadian Artillery and then back to the RCASC, but on November 18, 1944 he is with the 3rd Canadian Infantry Training Regiment.

Pte. Milotte arrived in Normandy on December 16, 1944 and joined the Black Watch on the 31st, when they were dug-in south of Nijmegen. According to the War Diary that New Year’s Eve “all was quiet, and the moon was riding high in a cloudless sky”. I find this story quite personal as my father joined the Regiment soon after this. The Black Watch’s advance through Holland was at an almost break-neck pace and I have talked with veterans about how quickly they advanced. So, by April 1945 the Regiment was fighting its way north through central Holland to Groningen and into Germany via the Hochwald Forest. On April 29th the Regiment was in the area of Hude, Germany and at 0800 hours left as part of an operation named ‘Stutz” and, despite some elements encountering heavy resistance, they attained their objective by 1317 hours. Pte. Herbert Milotte was the only Black Watch soldier killed on that day, less than two weeks shy of his 24th birthday. There are no details about how he died, unfortunately. Pte. Milotte was initially buried in a temporary grave “in yd in front of low thatched house East side of rd 496997 Sheet 2916 GERMANY – NW of Delmenhorst”. He would have been disinterred at some time in 1946 and was reburied in Holten Cemetery in Holland.

The final casualty is quite a sad and tragic story. Pte. Arthur Summers was born on December 19, 1925 in Montreal. He was single when he joined the army on August 7, 1944 and was working as a printer with the Montreal Daily Star, a job he had been in for all of two weeks. Pte. Summers was 5′ 9′ tall, 144lbs with blue eyes and brown hair. He did his basic training in St.Johns, Quebec, and was granted embarkation leave until December 28. By January 14, 1945 he was with the #1 Training Brigade in Debert, Nova Scotia. He left Canada on the 14th of January, arrived in England on February 8, and was in France on April 14th. He was taken on service with the Black Watch on April 30th, when the hostilities were essentially over. On the 12th of May witnesses reported hearing the action of a pistol being worked and then a single gunshot from a tent and when they rushed in they found Pte. Summers on his cot dying. A Court of Inquiry found that Pte. Summers was in possession of a German P35 pistol, despite the fact that he did not seem to have it during a complete kit inpsection for such contraband weapons on May 11. The Court found that Pte. Summers was responsible for his own death and no-one else was held accountable. Among his personal effects were “2 Nazi Arm Bands, 1 pr. Nazi Collar Tabs, 15 Different Nazi Medals, 4 Nazi Medal Ribbons”. Having gone through hundred of these records, this is one of the rare soldiers who had such souveniers and it may reflect on his lack of combat experience. However, this tragic story has a poignent end. In 1948, Pte. Summer’s family received a letter from Ginny Middlekamp of Almelo, Holland, who had adopted the grave of Arthur Summers, although the initial cross read K.W. Summers, for some reason. In closing her letter, Ginny writes:

My dear unknown family, it must be so very, very sad for you to loose (sic) a member of the family in the war. But may be there’s one thing (we Dutch people can say) it is nice and good for you to hear in your sadness. We Dutch peole are very proud of the Canadians. They were it who gave us our liberation. They did all for us. They did well! Very proud we are all. Never we’ll forget what the Canadian soldiers have done for us All!

Pte. Arthur Summers was 19 when he died and was initially buried in a civilian cemetery in Stallham, Germany. At some point, presumably in 1946, his body was exhumed and he was reburied in the Canadian Military Cemetery in Holten, Holland. 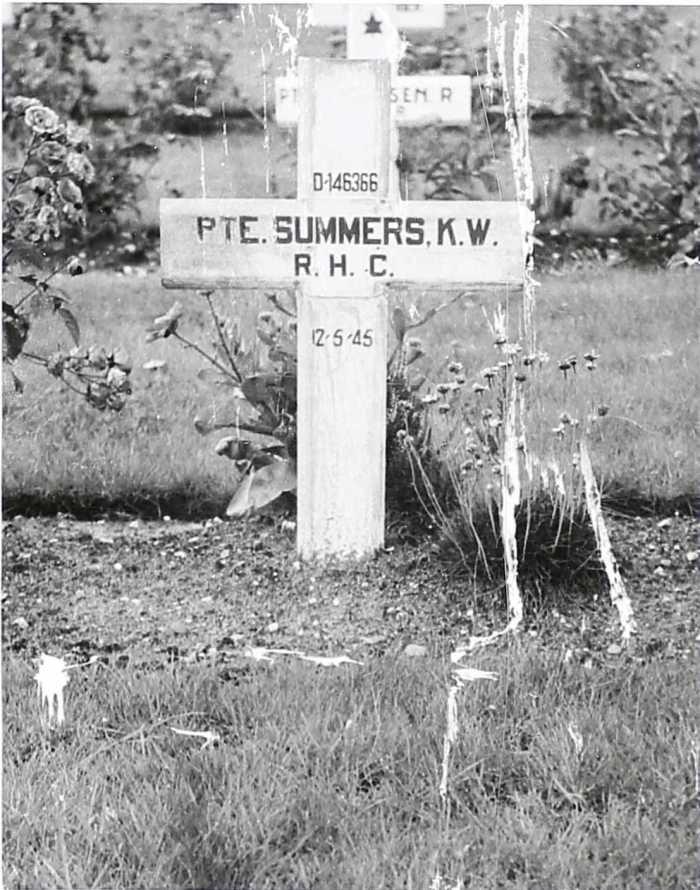