It isn’t often when perusing attestation papers one finds reference to the soldier’s previous occupation as “Actor – Legitimate”. But this was the case with Gerald (Gerry) Johnstone, who joined the Black Watch in Montreal on the 27th of September, 1939. Gerry Johnstone was born in Winnipeg, Manitoba in 1904 and moved to New York in 1923, ostensibly to pursue a career in acting. He took up the stage name Gerald Kent and began to act in productions on and off Broadway. In 1928 he appeared opposite Mae West in the travelling stage production of “Diamond Lil”, which was the apex of his career. Soon after the start of the Second World War, he moved back to Montreal and volunteered with the Black Watch. He was almost 35 at the time. This would have been a culturally and financially difficult move – he had listed his acting income as $100 a week – as a soldier he would have received just under $10 a week.

One of the first things we learn from Gerald Johnston’s service record it that he seems to like to have a drink or two and racked up seemingly unending charges for drunkenness and AWLs almost immediatey after enlisitng. However, when the Regiment shipped off to England his arrival was big news:

There is very little information on Johnston’s time while in England and the next salient event in his service was taking part in the infamous Dieppe raid in the early morning hours of August 19, 1942:

On that day, they arrived at Puys, just east of Dieppe. A very ambitious task was assigned to this small band of men as they were to support the Royal Regiment of Canada with machine guns and mortars. However, their German enemies were alert and ready for battle upon the arrival of the Canadian regiments at Puys. The Black Watch (Royal Highland Regiment) of Canada found themselves pinned down by the enemy with mortar and machine gun fire. The raid did not go as planned on that ill-fated day and the Black Watch (Royal Highland Regiment) of Canada suffered four fatal casualties. (http://www.veterans.gc.ca/eng/remembrance/history/second-world-war/dieppe-raid/black_watch)

Three platoons of the Black Watch took part in the Dieppe Raid, the majority of whom were forced to surrender to the Germans, including Gerald Johnston. Unfortunately,  there is no direct information on his movements prior to 1944, but testimony by Pte. John Maloney at the enquiry into Johnstone’s death probably gives a good outline of his journey, assuming their experience was similar. Maloney was also captured at Dieppe and sent to an transit camp where he remained for five days. Following this be boarded a train where he was given a loaf of bread and a tin of meat and shut in with fifty other POWs. The train was headed to Stalag VIII-B (later renamed Stalag 344), located in Upper Silesia (now Poland), a journey that took five days, most of it without water. Stalag VIII-B was the largest German camp for Allied POWs. It was there that  Johnston met Pte. Mervyn Kerr, who was to become his best friend and who was to play a fateful role on the night of his death. It is most likely that they were together when about eighty percent of the Canadians were moved north to Stalag II-D, near the village of Hammerstein in Pomerania (now Garne, Poland), in February of 1943.

The Canadians found their treatment at Stalag II-D much harsher than in previous camps. The official German justification was that the Canadians “behaved badly” on arrival and, as punishment, were only given work details in farming and forestry, rather than somewhat easier, and warmer, work in factories, etc. Johnston was in charge of a fifty man “commando” party working in a small camp about eight miles from Stettin (now Szczecin, Poland). He had apparently written to his mother about the conditions at the Stalag and complained of being given very heavy labour from early morning until dark. She expressed concern that he was writing in rebellious terms and he said that the prisoners would not be able to stand such treatment for much longer.

Pte. Rene Jusseau also testified for the enquiry into Gerry Johnston’s death on November 5, 1945. He remembered that night because it was his birthday and a friend had baked him a birthday cake for supper. When Johnston learned of the occasion he got up and shook Jusseau’s hands and told him that he hoped his next birthday would be with his family. This was the last time the men saw him alive. The regular roll call for the hut was at 20:00hrs, and when the guard arrived the men realized that Johnston was missing. They convinced the guard to give them until 21:00 hrs to find him, which he agreed to. Someone ran to look for him at the Polish compound where I believe there was a supply of alcohol. They weren’t successful in their search and at 21:00 an Unteroffizier (Sergeant) arrived to do the roll call and, realizing that Johnston was missing, picked up a rifle and went looking for him. This particular Unteroffizier was described by Pte. Mahoney as being over 6 feet tall, very domineering, and constantly threatening to shoot people. Given that description and what we know of Johnston’s personality, and his rebellious feelings, trouble was sure to follow. In any case, this is where accounts of the ensuing events differ greatly.

The official German account, which was transmitted to the Swiss Red Cross, was that Johnston was missing the night of November 5 after changing his clothes following a work detail. He was found hiding behind a wooden stand in a corridor on the ground floor of a building. He would not comply with orders to come out and had to be forcibly removed. The Germans then claimed that on the way back to the hut he lunged at the guard, who moved aside and shot Johnston in self defence. The official conclusion was the “the use of arms was justified”. There were no witnesses to the shooting.

Pte. Kerr offers a much different version of the events. According to Kerr, Johnston had been planning his escape for some time and was intending to flee to Stettin and then to Sweden. On the night of November 5, Kerr met Johnston at the fence that surrounded the camp, cut a hole in the fence, gave him a couple of chocolate bars, and watched him run up a road into the woods. Kerr says that Johnston got 75 or 100 yards away when he was confronted by the Unteroffizier mentioned above. Upon seeing him Johnston apparently turned and walked the other way, but when the Unteroffizier yelled ‘halt’, he put his hands up. Kerr couldn’t see much at this time but he heard the German ask Johnston where he was going and how did he get out. He subsequently heard a single report from a rifle. He said he wasn’t able to see Johnston’s body because there was a rut in the road he was on. This was all over by 21:30. The men in the hut also heard the rifle report and sometime later a German guard told them that Johnston had been shot but that a doctor was looking after him. Somewhat later he returned, quite afraid, to say that Johnston was dead. The Unteroffizier also came to the hut a couple of times that evening but denied that Johnston was dead. The next day the men observed a group of civilian officials where Johnston had been shot and it was later confirmed that he was dead. Requests to retrieve his body were denied and it wasn’t until the morning of November 7 that they were able to get Johnston and prepare him for burial.

Gerald Johnston was apparently very well-liked among his fellow prisoners and they actually gathered a pool of money to buy him a coffin from the near-by town. They also paid the local railway Station Agent to photograph the funeral. The Germans agreed to let 15 POWs attend the funeral ( a request for 40 was denied), which was at 7am in order to reduce the fuss it may have cause. The burial took place in the municipal cemetery in Breitenstein Friedeberg. They refused to let Johnston be buried in his uniform, however, and it was packed with his belongings, which appear to have vanished. 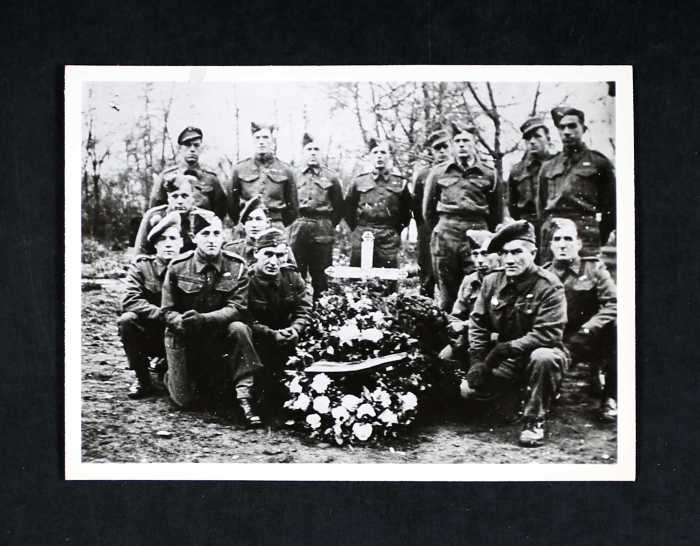 An unnamed fellow prisoner of Johnston’s wrote a personal letter to authorities in which he described the funeral. He closed the letter by saying, “We all miss Gerry”. Gerald Johnston’s remain were disinterred and he now rests at Heverlee War Cemetery in Belgium.

The story of Gerald Johnston, aka Gerald Kent, Gerry to his friends, does not end here. Stalag II-D was liberated by the Russians, and those freed included Mervyn Kerr, Johnston’s good friend and escape accomplice. As he was being transported through the Russian lines on February 17, 1945, Kerr noticed a detail of German prisoners doing road work under Russian guard. Among those prisoners he recognized the Unteroffizier who had murdered Gerald Johnston. In Kerr’s words, he managed to find a Serb who spoke both Russian and German and they related Kerr’s story to a Russian officer. The officer separated the Unteroffizier from the other prisoners and offered his pistol to Kerr. Apparently Kerr hesitated too long for the Russian, who shot the prisoner himself. The inquiry into Johnston’s death concluded as follows: “The perpetrator of this atrocity, if it was one, therefore having already received his just punishment and the facts having been investigated so far as it is now possible to do so, the file has been closed”.

Well, the file wasn’t closed without a bizarre bit of fantastical reporting. Somehow, the Sunday Pictorial in London reported that 1500 Canadians revolted in Stalag II-D and that Pte. Gerald. M. Johnston was their leader and was shot dead. The Army took this very seriously and used considerable resources to determine it was complete fantasy. 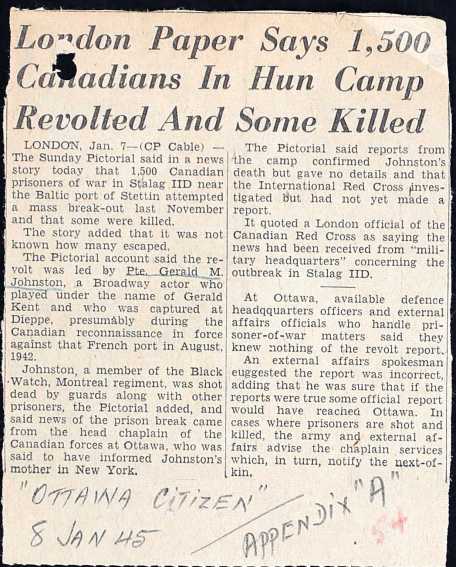 And, to add another twist to a remarkable story, one of the things Gerald Johnston was recruited to do while he was in England was to act as himself in a short propaganda film called “From the Four Corners” and starring no less than Leslie Howard. It is an eerie thing to be able to stare at Gerald Johnston, especially after reading his story, and even more so as he plays himself and is most likely wearing his own Black Watch uniform. Here is the link: